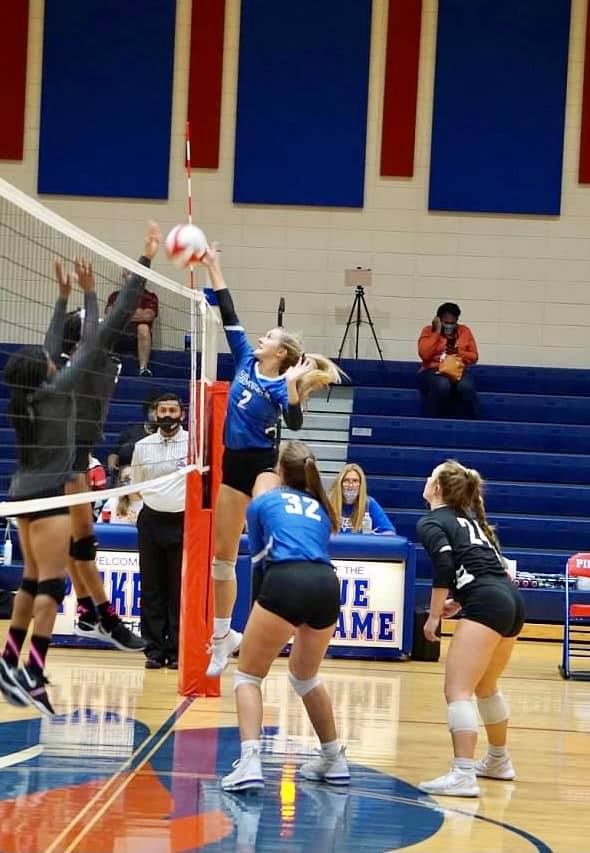 PHOTO CAPTION: Junior Alaina Craigo (2) contests a ball over the net against Westside while sophomore Faith Clarkson (32) and junior Bailee Earnhardt (24) get ready in case the ball comes their way. Lyndsay Earnhardt/Photo

“What an exciting week it has been for the Lady Blue Flame,” said Pickens High Assistant Volleyball Coach Pamela Clarkson. “Our young ladies ended the week with a sweep of the region as they have gone 8-0. I am proud of each of their efforts and their determination to this point and as we finish out the last remaining games we have for our regular-season play. We are striving daily to become a better team as we focus on the ‘little’ things and making sure we’re not out on the court to play, but rather compete!”

The Lady Blue Flame traveled to Powdersville High School on Saturday for a non-region matchup in the Annual Dig Pink Volleyball game for Breast Cancer Awareness Month. The Lady Patriots extended Pickens to four sets, but the Lady Blue Flame prevailed 25-19, 21-25, 25-14, 25-20. During the match, junior Caroline Lucas led the Blue Flame in kills with eight, followed by sophomores Lauren Dow and Faith Clarkson with four each. Dow led in assists with 18, and senior Maddy Gentry had 16. Sophomore Macie Gentry led in digs with 28, followed by junior Bailee Earnhardt with 22. Lucas was successful on 21 serves, with two aces, and Dow also placed 21 serves in play.

The Lady Blue Flame’s record currently stands at 12-4 overall, 8-0 in Region 1A. All four of Pickens’ losses have come against 5A schools.

The Lady Blue Flame will travel to 5A T.L. Hanna of Anderson on Thursday evening, where they will also face Riverside of Greenville.