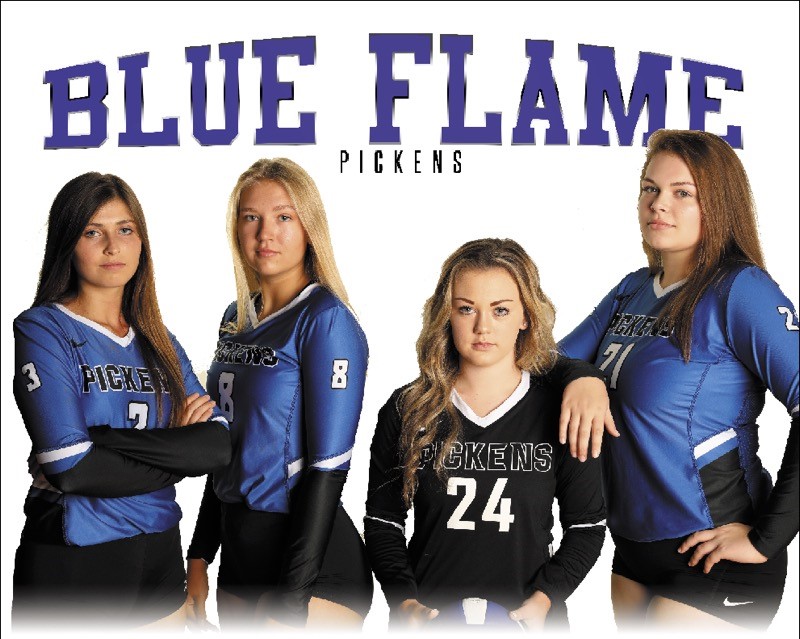 In a match played Oct. 7 in Walhalla, the Lady Blue Flame defeated the Lady Razorbacks in three sets, winning 25-15, 25-9, 26-24. In the BHP match, played on Senior Night Oct. 9 in the friendly confines of Peggy Harden Anthony Gymnasium, the Lady Blue Flame easily defeated the Lady Bears 25-12, 25-17, 25-12. After the match, seniors Olivia Dow, Kaylee Gillespie, Brooklyn Johnson and Carlee Seaborn were honored in an elaborate ceremony that included remarks about each player and a multimedia show that looked back at the 2019 season.

“I cannot believe that Wednesday (tonight) will be our last region game,” said Blue Flame Coach Rikki Owens. “We are excited for the playoffs, but the season is flying by too quickly!

“Playing BHP was bittersweet—sweet because the win sealed the deal for us as we earned earn first in the region, but it was an emotional night knowing that it was Senior Night. These four young ladies hold their teammates accountable while supporting them with love and encouragement and display exceptional leadership for our team. We wrote them notes thanking them for all that they do, but most importantly acknowledging how much we have learned from each one of them. They are all so unique, and together, they are unstoppable!”

In the Walhalla match, senior right-side hitter Olivia Dow led in kills with 12, followed by Lauren Dow with 10. Senior setter Kaylee Gillespie was the leader in assists with 24, and Lauren Dow had 18. Sophomore libero Bailee Earnhardt led in digs with nine, followed by sophomore defensive specialist Ali Pace with eight. Four players had one block each: Olivia Dow, Lauren Dow, Caroline Lucas and Faith Clarkson. Three players had 100 percent serving on the night: Lauren Dow, Calie Covey and Clarkson.

In the BHP match, senior outside hitter Brooklyn Johnson and Olivia Dow tied for the most kills with 10 apiece. Gillespie led in assists with 18, followed by Lauren Dow with 14. Senior libero Carlee Seaborn was the leader in digs with 13, and Olivia Dow had 10. Olivia Dow led in blocks with three. Lauren Dow and Pace each had 100 percent serving at the BHP match.

The Lady Blue Flame play Daniel tonight at home and play their last regular-season match Wednesday against Palmetto in Williamston.