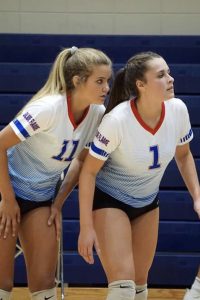 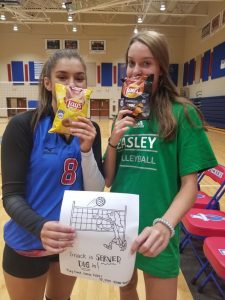 Jessie Lee Gilstrap (left) of Pickens High and Gabby Warren of Easley High display snacks that were set out for the Easley players by the Lady Blue Flame in a spirit of sportsmanship before the volleyball match.

In the match against Easley, senior right-side hitter Olivia Dow led in kills with 15, followed by senior outside hitter Brooklyn Johnson with five. Senior setter Kaylee Gillespie led in assists with 22, while freshman setter Lauren Dow had 11. Sophomore libero Bailee Earnhardt led in digs with 15, followed by sophomore defensive specialist Maggie Sizemore with 10. Olivia Dow had four blocks in the match, and sophomore middle hitter Caroline Lucas had three.

During the matches against Southside Christian and Greenville, the Dow sisters achieved the “Double Dow,” as Lauren led in kills with 13, followed by Olivia with 10. Gillespie led in assists with 27, and Lauren Dow had 14. The Dow sisters also led in blocks, with each having two. Sizemore had 26 digs, and sophomore defensive specialist Ali Pace had 18.